No Lugar – Arte Contemporáneo is a project that hybridizes artistic production with curatorial practice; In order to operate autonomously, it is activated as well as a space for artistic residences, exhibitions and workshops. No Lugar is mobilized through the fusion of these strategies to promote, disseminate and exhibit contemporary art.

The residency of No Lugar – Arte Contemporáneo brings together visual artists, curators, researchers, cultural managers and cultural agents from Latin America and the world to live and work in the city of Quito. Through its residency program, from 2011 to the present, No Lugar has worked with more than 100 artists, curators, researchers and cultural actors from America, Europe, Africa, Asia and Oceania. In the residence, artists, researchers and curators have the opportunity to participate in an intensive process of creation, production and reflection, which in the end will be shown to the public in the form of: exhibition, open study, workshop or conversation. The program stimulates the production and positioning of different cultural agents, as well as seeks to contribute to the insertion of contemporary Latin American art on an international level. 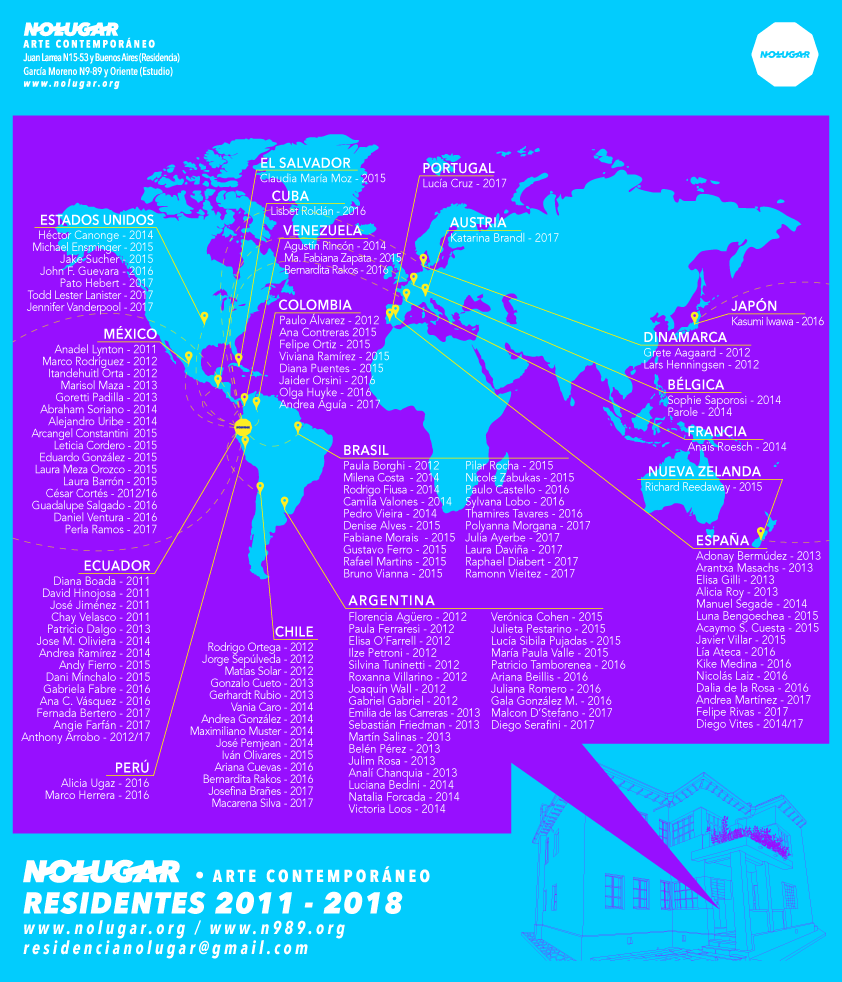 The residence of No Lugar works in a comfortable apartment in the La Tola neighborhood, right in the center of Quito. La Tola is one of the emblematic neighborhoods of the Ecuadorian capital. From 1629 the sector was known with the name that characterizes it. Despite its urban development, most of its houses are part of the patrimonial capital inventory, because its architecture was inspired by the style of the colonial helmet. It is also one of the areas with the greatest cultural activity in the city, by the different artistic institutions, museums, art centers, galleries and other independent spaces that are close to the place. Among the points of interest close to the house are Museums such as the Alabado, the City Museum, the Contemporary Art Center, the Itchimbia Park, the Cumandá Urban Park, the National Museum. Also on the perimeter near the house is the bus station -which connects with the entire city of Quito North and South-.

The apartment that houses the residence programs retains its home aspect, with furniture and works of art from the space managers, which makes it a very comfortable environment. The house has three rooms – two single, and another shared – as well as a fully equipped bathroom and kitchen. The space has a large dining room, very bright and with a small patio, which, in addition to its domestic use, allows for meetings and appointments with professionals, as well as public presentations.